The screw element is the most important part of any screw-type compressor.

It's that part of the machine where the actual compression takes place.

It is the heart of the rotary screw air compressor.

They are constant flow (volume) with variable pressure compressors. Which mean that at a given speed (rpm), they always supply the same amount of air (in liters per second for example), but can do so at different pressures.

Why are they so popular? Since it's a continuous process (as opposed to reciprocating piston compressors) they supply a steady, non-pulsating air flow, with minimum vibrations and maintenance and maximum lifetime.

They can operate 24/7, 365 days a year. The normal lifespan of a screw element is about 40.000 running hours, before a complete overhaul is necessary.

Let me explain how a rotary screw element is built up. See  this example picture of an oil-free screw element. 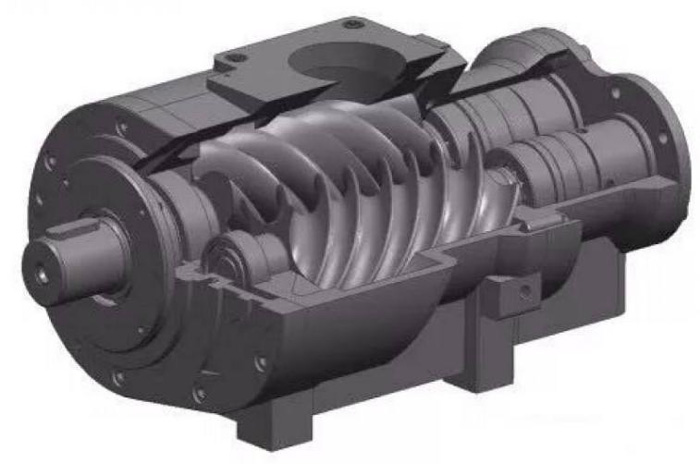 As we see the rotors have different kinds of bearing son both sides so they run smoothly for years without any maintenance.

There are usually two pairs of bearings on both sides; bearings for radial loads (loads because of the turning of the rotors) and axial bearings.

Because the screw 'push' are to one side (the high pressure side) the rotors want to move to the opposite direction. The axial bearings take on this load.

We can also see that the male rotor has an axle that sticks out with a gear on it. This is the driving gear.

Sometimes it's a pulley. The two rotors are also connected to each other by gears (on the left side in the picture) these are the synchronization gears.

The element is water-cooled, for this purpose there are water cooling pockets in the element housing.The gears are lubricated with oil, as is indicated by the yellow/brown parts. Oil-injected screw elements don't have this, since they are cooled by the injected oil.

The housing can be disassembled for maintenance.

Air-ends come in many different sizes, but they all look basically the same.

Here are some photos of air compressor elements. 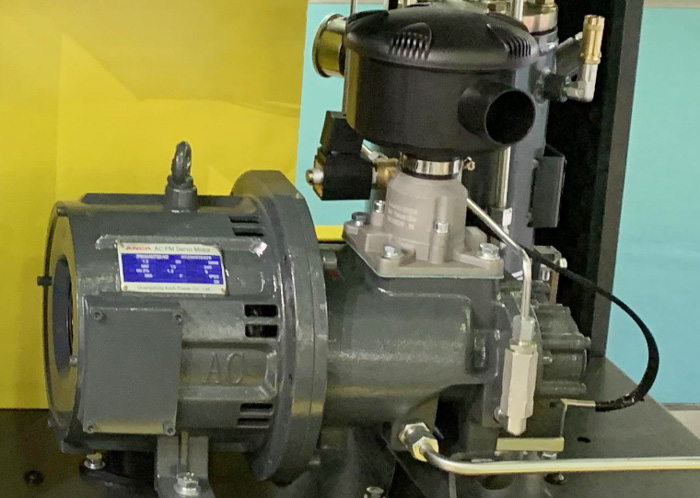 Air compressors element. This one is on a brand new compressor, as you still it's still clean and shiny. 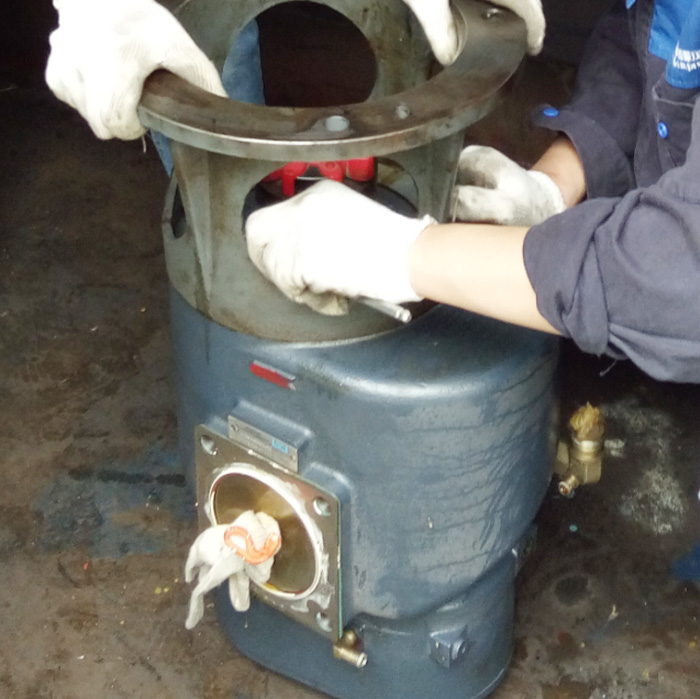 Air compressor element on variable speed compressor. This is what a compressor  typically looks like: dirty!

How does it work? Inside the compressor element are two screws (called 'rotors') that turn in opposite direction. 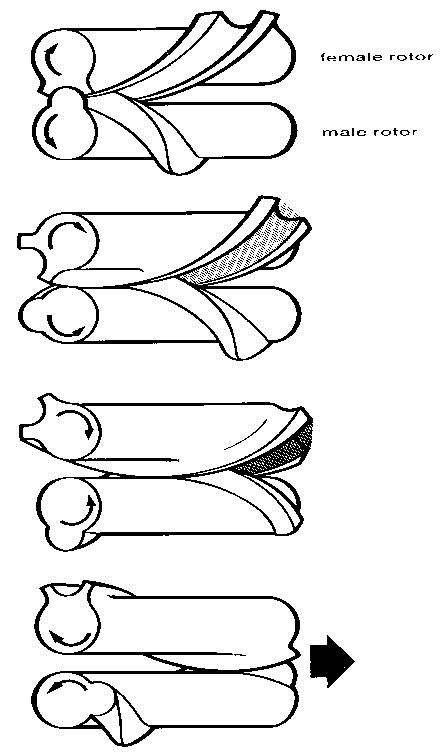 Trapped air between the rotors

In the case of the rotary screw, the air gets trapped between the two rotors. The rotors have a special design for optimal efficiency and performance.

As can be seen on the picture: air gets sucked in on one side (cold, low pressure), gets trapped between the rotors, and is discharged on the other side (hot, high pressure).

This compression requires power, which is usually supplied by a big electric motor.

There are two basic types of screw compressor: oil-injected and oil-free.

Oil-injected rotary screw compressors are the most common, since they are the cheaper ones of the two types.

Oil-free screw compressors are only used in applications where to compressed air must be 100% oil free (usually in food-processing plants, chemical plants, etc).

I will explain later why the oil-free type is more expensive.

The rotors have the shape of what is called an "helical screw". Yes, it looks like a screw. There is a male rotor and a female rotor. 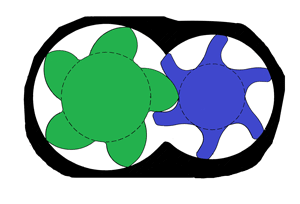 Manufacturers are always looking to improve the screw design. They look for a design that gives the best efficiency. In other words: how to pump the most are with as little possible power.

The exact design and manufacture of the screw is one of the most best-kept secret of any air compressor manufacturer. It's a no- go / no photographs area of the factory.

The male rotor is driven by an electric motor or sometimes a diesel engine (which is the case with portable compressors). They run anywhere between 1000 and 6000 rpm.

This is a problem, because hot metal expands, it becomes bigger. When it expands too much, the two rotors will touch each other and/or the housing… this will usually result in a completely messed up screw element (costly!).

For this reason, we can't make an unlimited high pressure this way; it would simply get too hot.

The maximum pressure a screw element can create is called the pressure ratio. That is the maximum output pressure divided by the input pressure.

For oil-injected types, the pressure ratio is normally maximum 13. For oil-free types, this compression ratio is about 3.5 max. We'll see later why.

More on oil-free and oil-injected screw compressors in the following paragraphs.

The rotary screw element is an example of a highly engineered part, with thousands hours of research into it. There are many variables to think about when designing the best screw element.

As said before, oil-free screw compressors used two stages, with an intercooler to reach the desired end pressure. But why is it so difficult, in this age of computer-aided design, robot controlled cnc-machines and complicated mathematic models, to create a single-stage oil-free air compressor?

The problem is that many factors influence each other.

Because of the lower efficiency, the rotors will need to run in at a higher speed. This gives extra problems with vibrations and life time of the rotors and bearings.

The high compression ratio will result in a higher exhaust temperature. Steel has the bad habit of expanding when it gets warmer. The high temperatures result in high thermal expansion of the rotors.

This all adds to the problem of making the clearance as small as possible (too small and the rotors will touch each other when warming up!).

What are the differences between oil-free and oil-injected rotary screw elements? And why is n oil-free element more expensive compared to an oil-injected element?

Gaps and clearances allow the compressed air to flow back the 'wrong way'. It lowers the efficiency and performance of the air-end.

Because the oil-free type compressors don't have any oil, the clearance between the rotors and the housing must be much smaller compared to oil-injected type screw elements. Because of this the price of an oil-free air-end is much higher.

The needed maximum clearance depends on the rotor diameter and is about 1 thousand of the diameter, max.  So if the diameter of the rotor is 200 mm, the clearance would be only 0,2 mm, which is pretty small for such a complicated shape.

Besides this, the oil-free elements require extra pockets and channels for cooling water. The oil-injected type element is cooled by the injected oil and doesn't need extra cooling water. 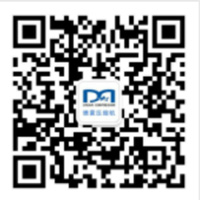